Residing in Los Angeles, David is currently an Interventional Radiology Nurse. In addition, he has a background in teaching history to middle school students, working as a corporate and real estate paralegal, and running a successful real estate office in New York City. He is an avid collector of comic books and loves to read science fiction on his time off. He is dedicated to advocating for students to read and grow intellectually and thinks that making education fun is a great way to aid at-risk students who lack the resources to reach their full academic and artistic potential.

David’s favorite comic book hero is Rom the Spaceknight because he follows a noble cause, looks cool in his silver cyborg body and is trying to save the earth from invading aliens that destroyed his homeworld. 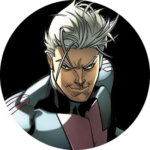 Troy has loved comics ever since he can remember and believes that he actually learned to read thanks to comic books! Up to this day, he still spends countless hours reading them. Troy has a professional background in sales and in business. He has owned two comic books stores (including one in Costa Rica) and organized the first and only formal Comic Book convention in Costa Rica. He is a lover of traveling, good food, and illustrator art.

Troy’s favorite comic book character is Quicksilver. He likes the duality of the character; he has been evil, he has been good—but at the end of the day he is a good guy. 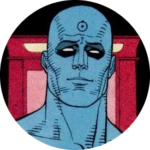 Gioconda, or Gio as all her friends call her, is from Costa Rica. She is a lover of photography, road trips, mountains, and lazy weekends. Gio has a professional background in marketing and project management and has now expanded into real estate. Her favorite comic book character is Doctor Manhattan. She likes the character’s internal struggle between caring and not caring for human concerns, because this struggle acts as a reminder that we should never forget that we are all in this world together. Moreover we should, at the end of the day, do something towards the greater good. 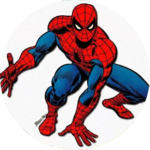 Living in Los Angeles, Alan is a Licensed Marriage and Family Therapist in private practice, providing psychotherapy for adults, teens, and couples in both English and Spanish. Before becoming a therapist, he worked as a sitcom writer, and currently sees many clients who work in the entertainment field who appreciate his understanding of the ups and downs of that industry. Alan began reading comic books at age five when living in Forest Hills, Queens, the same neighborhood that is home to Peter Parker!

Alan’s favorite superhero is Spider-Man, because he’ll always stick up for the underdog. Spidey has a great sense of humor, loves his family, and his understands that with great power also comes great responsibility. (Being able to swing between the skyscrapers of New York City is pretty cool, too.) 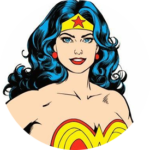 Originally from New York City aka Gotham City, Michelle is now residing in Tenefly, New Jersey and is currently a NYC Public School Principal. Before becoming an instructional leader, she was a Speech-Language Pathologist specializing in Phonologic and Language disorders. Michelle loves to read and hang out with her husband and two sons when she is not out using her superpowers to educate in the Big Apple.

Michelle’s favorite superhero is Wonder Woman because of her beauty, strength, intelligence and most of all, her will to do right for mankind. A secret known to a select few: Michelle has a tiara, bangles, and even a lasso of truth secretly stored away behind a painting in her office (and uses them when necessary)! 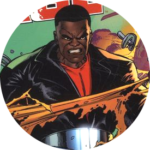 Gregory is a civil rights attorney with the California Department of Fair Employment and Housing, who—like his comic book heroes—fights for justice. Unlike those heroes, however, Gregory uses neither fists nor special powers; his weapons are his brain and his words. He jumped at the opportunity to support the development of youth’s reading and art skills through the use of comic books, and is proud to be a founding board member of Learn to Read Comics. Although he occasionally read comics growing up, Gregory rediscovered the joys of comics through graphic novels as an adult. He now enjoys reading comics with his young son.

Gregory’s favorite superhero is the first African American to be featured as the protagonist and title character of his own comic book, Luke Cage. Despite growing up disadvantaged, being framed for a crime he did not commit, and suffering discrimination and harassment by prison guards, Luke rises above his circumstances to fight for justice in Harlem and beyond. 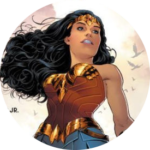 Originally from Washington, D.C., Caroline now lives in Los Angeles helping inventors and scientists launch their innovations. Previously she taught art and journalism to high school and college students and has lead literacy projects in Arizona and Southern California.

Caroline’s favorite superhero is Wonder Woman, who is unafraid to be herself and stand up for what she believes. Wonder Woman has inspired Caroline since she was a child, showing the world that anything is possible if you work hard, really care, and have good intentions.